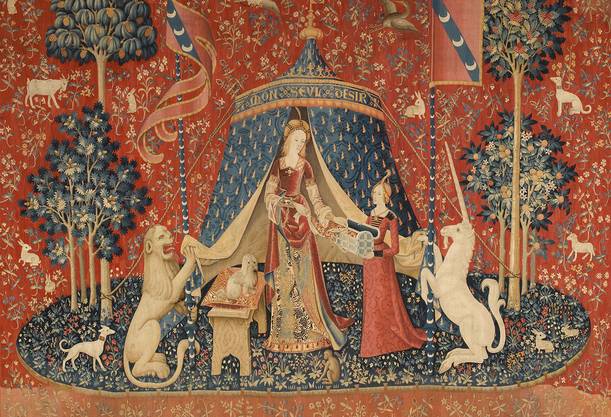 In the middle Ages, tapestries had a purely utilitarian function. They were originally designed to protect medieval rooms from damp and cold weather, to cover austere walls of big castles, or to insulate big rooms into more comfortable quarters. Tapestries used for furnishing big stone castles were very big in size and they required big looms, many workers and high capital investments. Thus, manufactories of this type arose in prosperous localities, usually weaving centers. By 1500, Flanders, especially Brussels and Bruges, had become the chief places of production. Due to their size and intricacy, tapestries became investments and displays of wealth and power. In these early tapestries, isolated figures or compact groups stood out against a background that was generally plain or embellished with plant motifs or flowers, those are called « mille fleurs » tapestries (thousand flowers). Tapestry became beside painting, sculpture and architectures one of the major visual art forms. 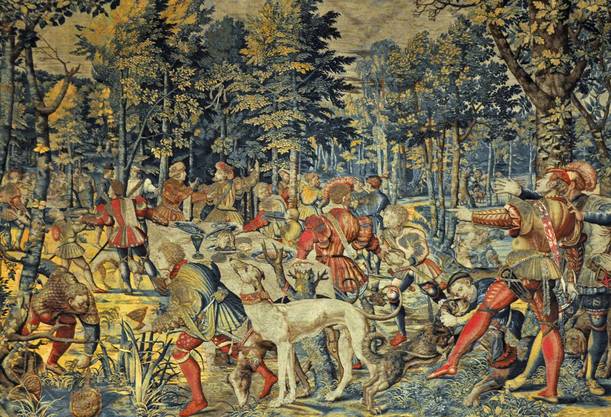 Tapestry became as well more complex, depicting crowded battle scenes or large groups of figures arranged in tiers under architectural constructions. Later in the 16th century, patrons chose to depict one or another of their favorite pastimes: the hunt, peasants at work and play (often themselves in disguise). Then came fashionable verdure’s, pastoral landscapes in which their estates were often depicted. The art form required rich patronage, virtually all of the now famous manufacturers: Beauvais, Arras, Gobelins, Aubusson, Felletin, Audenarde, Bruges, Ghent, flourished where wealthy kings and church monarchs held domain. Naturally, those who commissioned them selected the subjects. All those famous manufacturers were located in the northern part of France and Flanders, the Flemish part of Belgium now. In the 17th century, the first royal factory of Les Gobelins in Paris was established. Hundreds of tapestry makers worked at Les Gobelins during this period.

Craftsmen worked in groups on one painting at a time and wove their art form into the rich and colorful scenes shown in this gallery. The designers have always had an enormous role in making truly fine tapestry. Such is the case of Francois Boucher, designer for Beauvais since 1736. During 30 years, he designed six tapestry sets of 4-9 pieces each. At least 400 tapestries were woven after his cartons, splendid masterpieces of the Rococo style. By the end of the eighteenth century, wallpaper replaced wall coverings of wool and silk. Because of the Industrial Revolution and the creation of automated processes, such as mechanical looms and weaving machines, plain fabrics could be mass-produced at a much greater rate and lower cost than in the past. Unfortunately, skill workers at a great expense could still only generate anything other than extremely simple patterns. Tapestry weaving became very expensive. 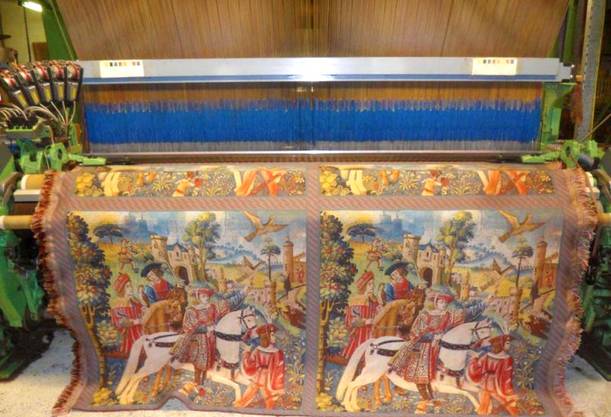 Around 1805, Joseph Marie Jacquard (1752-1834), developed the concept and made a more sophisticated loom using "punched cards" to command the position of each thread in the weaving process. Jacques de Vaucanson created the first mechanical looms in the second half of the XVIIIth century. With the knowledge of making designs for tapestries and weaving, Flanders became one of the most important areas were ateliers were located. Now these days the best Jacquard looms are used to produce very fine jacquard tapestries. The looms became increasingly sophisticated. This means there is more flexibility to create new tapestries.
The greatness of old Flanders could not be better illustrated than by one of its most famous export product: Belgian Tapestry. In the weaving of tapestry, artistic flair and craftsmanship were combined to produce treasures, which are now housed in private collections, renowned museums and public buildings worldwide. Today, this noble art lives on in the tapestry products manufactured and distributed by Mille Fleurs Tapestries.

Welcome to our webshop

You can change your preferences below.